Skip to content
You are here
Home > IN THE NEWS > Opening address of PFF president Mariano Araneta, Jr. in the 17th PFF Ordinary Congress 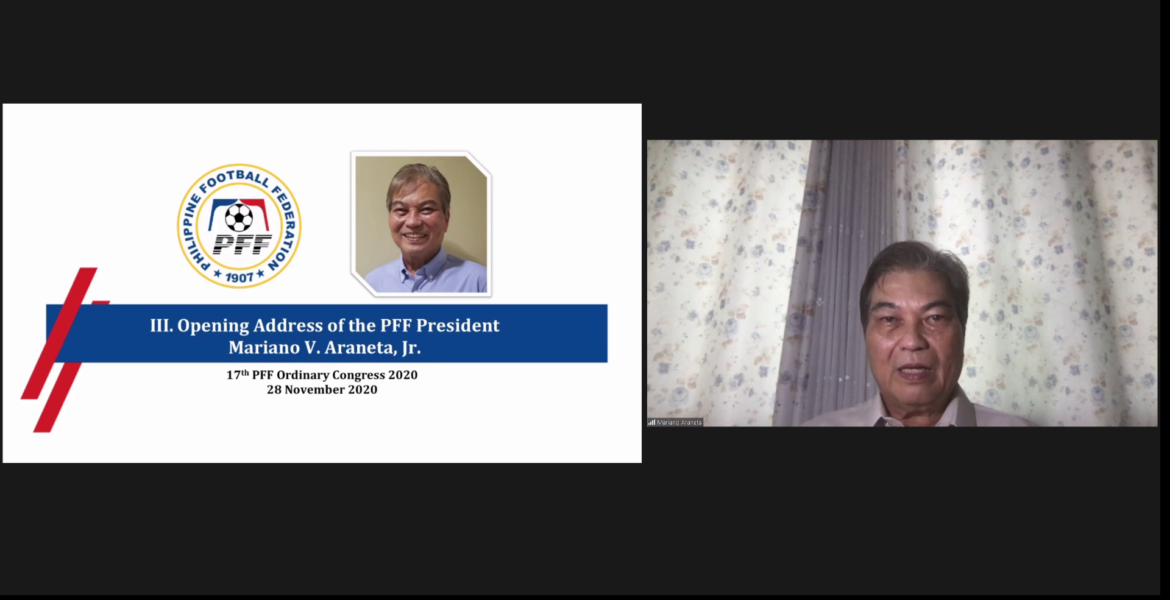 First, I hope that you, as well as your families are safe, well, and healthy. We are holding our PFF Congress this year in the most unique and most challenging of situations. But even though we are not in the same venue right now, I know that we remain united and strong, ready to give support to those who are enduring this difficult period.

May I ask a moment of silence from the group to remember our dea friends who departed recently – former National Team captain and coach Rudy del Rosario and BOG member and Central Bicol RFA president Domingo “Toots” Baluyot.

Health and safety remain a priority. Even with professional football restarting under strict health protocols, we are still waiting for the go-signal for amateur football to kick off.

As we anticipate this, the PFF has already allocated funds for the RFAs to aid their efforts to restart activities.

This year started with plenty of promise and optimism. Unfortunately, it was sidetracked by the COVID-19 pandemic. But while the pandemic has affected our programs – much like other federations in the world, the heath crisis also provided the federation an opportunity to showcase its grit, resilience, and competence.

It gives me so much pride that some members of the PFF family have been assigned to key roles internationally. Our former Technical Director Aris Caslib is now a FIFA Regional Director for Southeast Asia. Our current head of International Releations Maja Año and Deputy Head of Competitions Department Warren Concepcion are both in Doha, Qatar undergoing QFA-AFF Safe Competition Management Scheme. Both of them are on the ground for the AFC Champions League. Back home, Atty. Gastanes also holds a key position as Philippine Olympic Committee General Secretary. These developments are proof of the trust and confidence of international organizations in the abilities of the people who work in the federation.

I would like to acknowledge the efforts of PFF General Secretary Atty. Edwin Gastanes for helping make sure that the PFF continued with its mission in developing and growing the beautiful game in the country. Atty. Gastanes also helped make sure that the federation complied with numerous requirements of FIFA to ensure that the COVID-19 Relief Fund is released to the PFF.

More than ever this year, the PFF had to be innovative, maximizing the use of the technology for activities to push through. We still held coaching and referees courses, grassroots webinars, and other media engagement activities. The PFF also finished the Boys’ Under-15 Championship won by NCRFA and the PFF Women’s League won by De La Salle University early this year.

It was so easy to write off Philippine football when the pandemic struck.
In fact, critics were quick to hump the gun on the PFF amid the health crisis.

It was a tough time. The PFL was postponed indefinitely in March and a few months later due to the COVID-19 pandemic, the reigning PFL champin Ceres-Negros understandably ceased operations.

But true to the never-say-die spirit that has been a hallmark of the sport in this country, the PFF as well as other stakeholders of the sport, the clubs, in particular banded together to take the sport to even greater heights late in the year.

Atty. Gastanes, PFL commissioner Coco Torre, our AFC-accredited doctors, and the Games and Amusements Board worked together in crafting protocols that allowed the return of professional football.

The 2020 PFL Season brought to you by Qatar Airways was compressed, but it did offer the best that Philippine football had to offer, showcasing young talent and impressive quality that rival the best in the region. As I have mentioned in the past, the PFL plays a crucial role in raising the profile of the sport in the country as it provides young players an option to pursue a career in football.

We extend our congratulations to United City FC (formerly Ceres-Negros FC) for winning the league as well as Kaya FC-Iloilo for finishing second. The Azkals Development Team showed the future is bright for our young homegrown players, while Stallion Laguna FC, Mendiola, and the newest club Maharlika Manila FC, all had moments to savor this season.

The true winner however, as one notable writer puts it, is Philippine football for overcoming all of the adversities and finishing a successful season.

The outcome was a result of a total team effort from the PFF, the clubs, and the league. As we emphasized, the health and safety of the participants are paramount in the bubble. Protocols were followed and close coordination with LGUs of Santa Rosa and Carmona were undertaken. More importantly, the league kept the bubble safe and secure through vigorous COVID-19 testing throughout the competition.

The sports entertainment package that is the PFL proved to be a big hit as we focused our efforts in becoming a bigger presence online and improved the broadcast of our matches.

On the PFL Facebook page, the 14 matches garnered almost half a million views. Social media engagements were also at an all-time high in the three weeks that the PFL bubble was being held. Almost 100 thousand more views were also registered on the PFL’s Youtube channel.

The viewership is a clear indication on the interest and love of Filipinos in the sport, something that we hope we can tap into as we lay down our plans in the coming years. We can now work towards league expansion by encouraging more clubs to join next season.

We are fortunate to have our own field in the PFF National Training Center in Carmona where a couple of Mini Pitches have also been constructed. It would have been difficult for the league to push through if the PFF didn’t’ have the facility.

As we saw during the PFL, the lights in the Training Center have also been installed and energized, allowing us to hold night matches.

I am also happy to report that with the help of AFC, the PFF has already paid the downpayment for the 4,000 square meter property inside the San Lazaro Leisure Park that will be the site of the new PFF building and the dormitories.

We may have encountered rough sailing during this pandemic year, but we are finishing the year stronger than ever.

But we cannot rest on our laurels.

We are now more equipped to take on challenges with lessons from this year in mind.

We are looking forward to a historic year 2021 when the PFF will have its biggest budget yet. This budget however comes with plenty of responsibilities as we have to comply with requirements set by FIFA and AFC.

I am also happy to announce that starting January 1, we will be introducing the position of PFF Deputy General Secretary for Football to ensure that the right focus and attention will be given to the numerous developmental activities and competitions of the PFF in the coming years.

The momentum is definitely on our side. May we never lose sight of putting the good of football in every activity that we undertake.

Let us continue showcasing the beauty of the game through hardwork and teamwork.

The year 2020 was a prime example on how far this sport can go if we work together. It also showed that Philippine football is, indeed, made of sterner stuff.

Thank you very much and Mabuhay ang PFF! 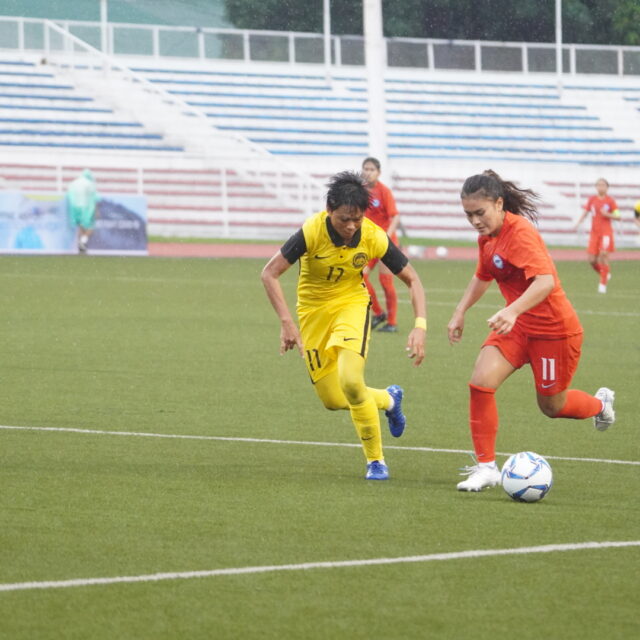 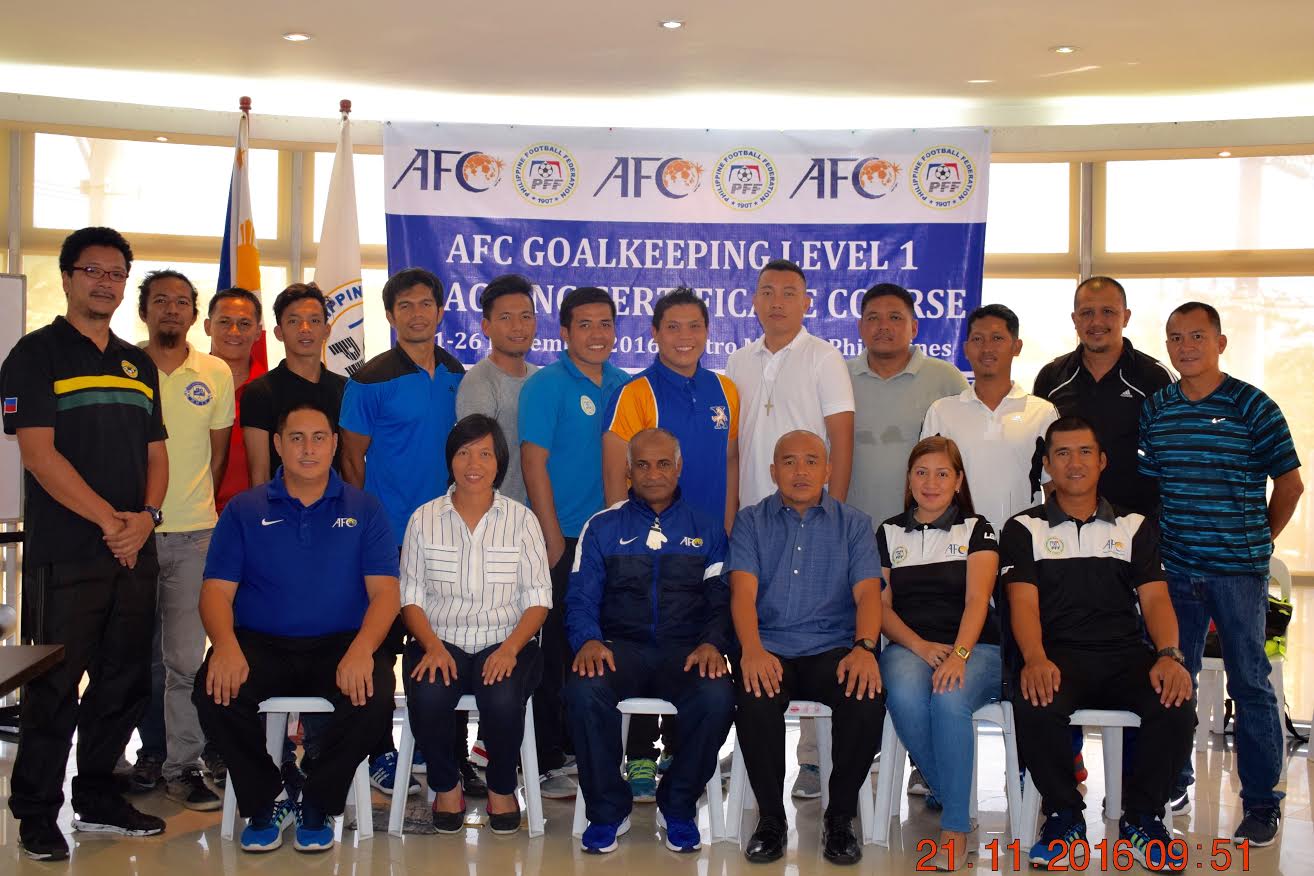